Warning: Declaration of aec_contributor_list::form() should be compatible with WP_Widget::form($instance) in /home/customer/www/getonboardskateboarding.org/public_html/wp-content/plugins/ajax-event-calendar/inc/widget-contributors.php on line 61
 Who: Experienced Skateboard Instructors – Get on Board Skateboarding 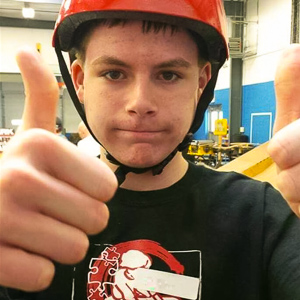 Donate to Get on Board Skateboarding

While our skateboarding workshops are free, producing them is not. Skateboards, safety gear and insurance are just some of the costs associated with our program.

Whether large or small, every donation helps.

Donate securely now by using the PayPal button below:

Meet the experienced skateboard instructors who serve on our board of directors. 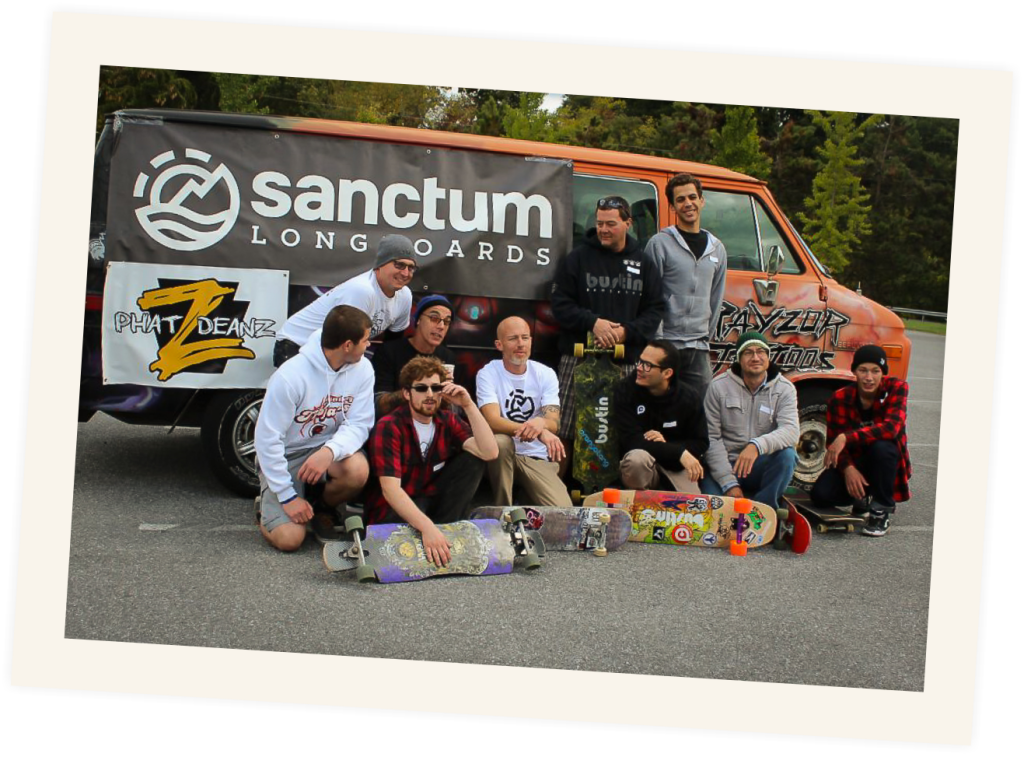 Our master instructors have a minimum of twenty-five years experience with developing and teaching skateboarding programs. Children participating in Get On Board Skateboarding workshops learn one-on-one from competent, experienced skateboard instructors, each well-versed in the methodologies of teaching neuro-diverse children. 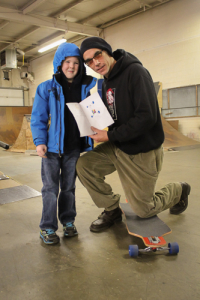 President Ray Young, among our most experienced skateboard instructors, receives a thank you at one of our free skateboarding workshops.

More than twenty-five years ago, Ray Young served a local YMCA as the main contributor to one of the first summer skateboard programs in existence. Ray went on to win the 1990 Youth of the Year Award from the Camp Shikellimy Branch YMCA for his contributions as a key designer, builder and instructor for the program.

In addition to conceiving of and founding Get On Board Skateboarding, Ray used his education background to develop the proprietary Developmental Skate Stages™ skateology system that gives the program unique appeal and measurable success in its mission to empower children with autism and other special needs. 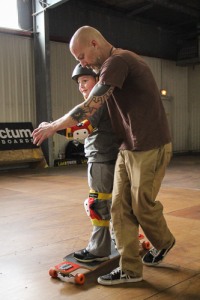 Nathan DeMuro, one of our experienced skateboard instructors and co-developer of our proprietary DSS™ system, demonstrates a technique.

In addition to his experience with the traditional martial arts, DeMuro has extensive backgrounds in skateboarding, parkour and yoga. His exposure to so many seemingly disparate activities showed him that they all share a connection he calls “Practical Coordination”, covering many tenets of movement: balance, walking, falling, climbing, running, lifting, standing, sitting, breathing and more. Nathan believes that the practice of these basic physical principles makes it possible to develop a routine for daily living that keeps one healthy, confident and happy. 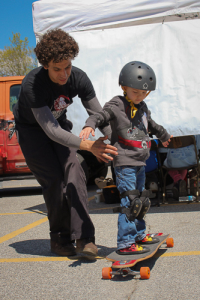 Darryll Hickey demonstrates the Proximity portion of our DSS™ instruction method during a lesson at a free Get On Board Skateboarding workshop.

Darryll Hickey is not only a co-founder of Get On Board Skateboarding but was core to the initial launching of the program. He serves many roles in the organization, including the ongoing development of the Developmental Skate Stages™ system, public relations, and senior administrator. His consistent feedback on the practical application of DSS™ has proven invaluable to the growth and advancement of the system. As head instructor he works with new instructors to ensure that the DSS™ methodology remains consistent. Hickey has demonstrated a unique patience with children on the autism spectrum and other neuro-diverse children, making Hickey the “go to” guy for children where patience and understanding are paramount. He also takes on a public relations role through various interviews, and was honored to be featured in a Times Square billboard awareness campaign for National Down Syndrome Society’s New York City Buddy Walk.

Behind the scenes he serves as senior administrator and is responsible for various organizational duties.

Hickey’s background is in team management and carpentry. Throughout the initial launch of Bliss Longboards he worked as a web developer, board designer and sales representative. He is currently still selling Bliss Longboards and working freelance as a marketing consultant. Hickey often works with Rayzor Tattoos, the founding entity of Get On Board Skateboarding. 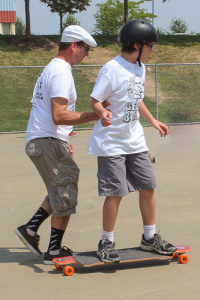 Instructor and event coordinator Gary Dutson demonstrates our proprietary SSP™ methodology at a free Get On Board Skateboarding workshop.

Gary has become an integral part of the Get On Board Skateboarding program through his intimate familiarity with our Developmental Skate Stages™ teaching methodology. His role as one of our experienced skateboard instructors and his assistance with organization and photography as our head of logistics are invaluable. Dutson serves as the initial point of contact for those new to the program by greeting children and parents, picking appropriate skateboards and safety gear and – most importantly – finding the best pairings between participants and instructors.

Gary is intimately familiar with the challenges and rewards of working closely with children with autism: he has raised a son on the autism spectrum who is now a junior in college. In his own words:

“It’s so rewarding to see the excitement of participants, volunteers and parents for these workshops. I look forward to watching the program grow and reaching more kids.”